As my fourth year booze-free comes to a close, I can’t help but ponder over how much my life has changed both externally and internally. The double chin that I thought was genetic went away pretty quickly, so never underestimate the power of beer bloat. In fact, I physically look better than I did in my 20’s; even though Lone Star beer tastes like water, it apparently has nice, juicy calories.

Unfortunately, not many really get to see that since I hermit myself away most of the time out of fear of criticism and never being understood. Without that social lubricant alcohol, I have a hard time making conversation unless it’s about the mysteries of the universe; I learned pretty quickly that most people DON’T want to talk about death and the meaning of life after a hard week’s work. They want to bitch about their coworkers.

Sometimes I wonder if my personality was just alcohol, there were always so many funny/terrible stories about what I did last night in the past, now there are no stories. I’ve turned into the boring person I used to shun. However, this boring person is much nicer, respects other people and their belongings, isn’t obsessed with celebrities because their own life is so devoid of real spirit, and gets great pleasure in being selfless (although is that self-indulgent in and of itself?)

Where I lack in social interaction, I now more than make up for in mental clarity and self-awareness. Brutal self awareness. The kind that makes you crawl into a ball in the closet in sheer embarrassment over past actions and things said. I’ve learned lessons from every shameful move I made in the past, and am now struggling through that whole “loving yourself and forgiving yourself” bit. I’m getting there. On good days, I think I’m a rock star. When I drank, it calmed my anxiety and allowed me to small talk with strangers like a Southern debutante pro. However, I could not stop at debutante level; bawdy drunk cousin making a big scene at your wedding and sharing everyone’s secrets was the role I fell into comfortably. Now my small talk is minimal, but my offensiveness is as well.

Even though I am told how great I’m doing all the time, I don’t really feel it. I’m too riddled with the anxiety and depression I was unknowingly self-medicating away. Lots of good changes have come my way, though. I never have to check my phone in the morning, dreading to read what awful weird texts I sent to people at 4 a.m. Going out to a fancy dinner is dirt cheap- I’ve actually been congratulated on being the fastest eater of a seven course meal by our waiter since there is no dilly-dallying over bottles of wine anymore. My legs have been bruise-free for years (I once thought I had a blood problem, and also worried that they were lesions. AIDS.) Nope, just bruises from bumping into things while blacked out. I take secrets to the grave now and good thing, as people tend to naturally tell me every dark and dirty thing they’ve ever done when talking to me. I think it’s because being sober makes me listen intently. I mean, I’m not talking anymore so I may as well listen.

The biggest change of all though is seeing my creative dreams become reality. It’s hard to get difficult creative endeavors going when you have a bottle in your hand non-stop. Now I dream it and DONE. Want to be a concert photographer? I wrote out a plan and did it. Want to be published in the Village Voice? Worked hard at the Westword and the Village Voice noticed and started publishing me. Wanted to be the owner of my own little version of the Shannon’s that I loved working at so much in high school? I’m sitting in the store right now.

Fighting is practically non-existent in my marriage, as we talk to each other and communicate about issues instead of blowing up and screaming things I don’t mean. At 4 am. Man did I love making a scene at 4 a.m. in my drinking days. There is so little yelling going on now that my husband laughs and laughs at me on those rare times that traffic gets me so heated I come in the door berating every driver I just saw and every move that they just stupidly, thoughtlessly made. That’s the extent of my anger, a little bit boring but much better on my psyche and everyone else’s.

Do I ever plan on drinking again? Nope. I yearn for a margarita on a sunny day, but I know that I will never be the type to have that one margarita. Even typing about this hypothetical ‘Rita is causing me to plan out where the next five will come from! (I’d go with another pitcher, and then move to a Mexican beer or two because after three ritas my cheeks get red as a Nutcracker doll’s). Instead I’ll just continue to make goals for myself, treat other people as well as I possibly can, wake up in the mornings feeling fairly awesome and excited about the day instead of thinking only of what greasy breakfast item can I devour the quickest, and occasionally feel wistful that I’m not invited to any parties that I don’t want to go to.

One of my favorite things to do on hot summer days is to go on car rides on back roads, just listening to music and letting the world go by, preferably with someone else driving! Here are some songs that are proving very road friendly for me this week:

Ezra Furman – Lousy Connection – Doo-wop horns and lyrics from someone entrenched firmly in the fringe, the new single from Ezra Furman is sassy, thought provoking and catchy as hell. Ezra gets what it is like to feel like an alien.

Kurt Vile – Pretty Pimpin’ – The new single showing once again he’s truly top of the league as a lyricist, and the chunky consonant heavy sound of the lyrics just feels good on the tongue when you sing along. With a slightly quicker beat, it sounds like this next album could be the one to give him more attention than long time fans will care for.

Cayucas – Moony Eyed Walrus – This summer is especially exciting because Cayucas is finally dropping a new album of surf inflicted Beck-like scrambled pop and folk breeze sounds. Their sound is a little more sophisticated this go round with quick time signature changes and more intricate vocal harmonies and interplay.

I’m absolutely sick of festival fashion. Paisley kimonos, fringed swimsuits- I want none of it (floppy hats are forever, though). As the bohemian raggedy layers of polyester look has hit total mass oversaturation, I’ve turned to simple pieces in black and white that you can dance in while maintaining a sense of comfort. Right now at my store we are carrying Stussy for women, who are designing things on the same wavelength as what I’m yearning for. Here are a few of the outfits I’ve worn the past two weeks, taking influence from Korean and Japanese women with bare legs and covered chest. Color palette has been revolving around black, white, mint, marsala and leopard print. 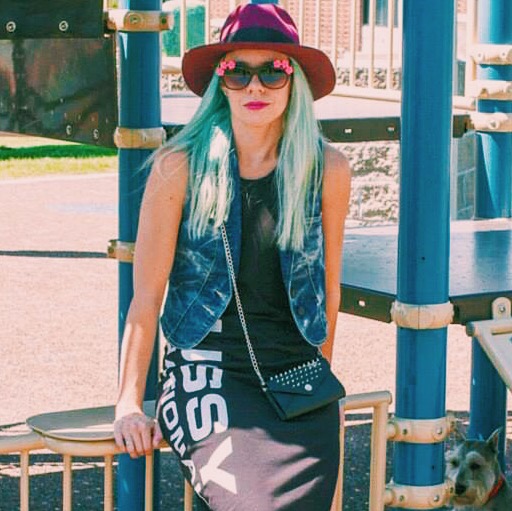